Pizza with a crust made of tuna! Seriously, things just got too weird around here! Only, it doesn’t taste weird at all! I promise! Instead it tastes really good. And not very much of tuna.My daugther’s response was: Wow mum, this tastes exactly like a real pizza! And then she ate it all! I admit, that she haven’t had a real pizza for quite some time so maybe she isn’t your most credible source but try it for yourself. You’ll be surprised at how good it is.

The crust is firm and you can hold it in your hand without any problems. And it’s dairy free. I know that many of you have wanted a dairy free low carb pizza crust for a long time and I think you’ll enjoy this one.

I actually got the idea from the German LCHF-enthusiasts. That’s one thing I love about social media. How you can get in contact with people from all over the world! I communicate a bit with some German LCHF-people from time to time. I have one (soon two) books out in Germany and the Germans really like my book which makes me incredibly happy and proud. And they write nice things about it on German Amazon which makes me even happier.

Well, the other day some of the Germans had made tuna pizza and I hurried up and copied the idea! 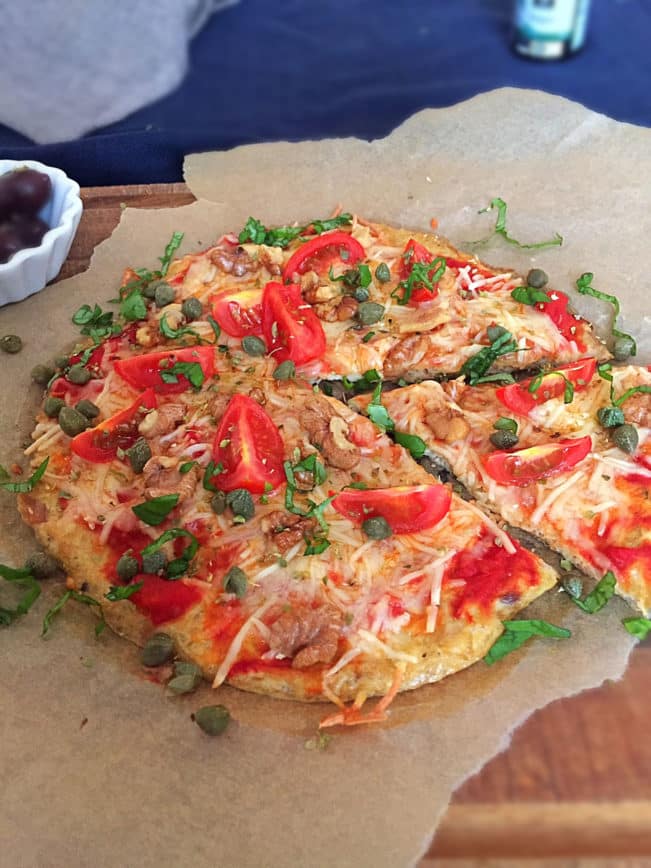 TOPPING (use your own favorite – here’s what I used):

2. Drain the water from the tuna and put the tuna in a bowl. Mix with egg and psyllium husks.

3. Place the tuna mix on a baking plate lined with parchment paper. Make it round and pretty. I used a spatula for this purpose.

4. Bake the crust in the oven for about 20 minutes or until it has turned lightly golden.

5. Take it out and lift it from the parchment paper using a spatula. Now put on your preferred topping. Bake in the oven for an additional 10 minutes.

6. I put on capers and basil before serving. Capers may sound weird on pizza but I thought it would go well with the tuna crust. Consider serving some olives and a green salad on the side.