It has now been more than 6 months since I decided to give up sugar completely.

It’s not something I have written lots about on the blog. For several reasons. First of all it has felt like a private thing. Giving up sugar is an inner journey more than anything and I haven’t felt the need to share. Secondly, it’s important for me to stress that I don’t see giving up sugar completely as something I think most people should do. I think most people would benefit from cutting down on sugar for sure, but cutting down and abstaining 100% are two very different things.

SUGAR-FREE FOR 6 MONTHS – A TIMELINE
The first 3 months were a walk in the park. I made it through October and a little mini-break in France, through November which was one long birthday with the twins turning 10 and through December with all its temptations, our trip to Zanzibar and a New Year’s Party. Everything was good. I could almost walk on water. Pure honeymoon bliss.

Then January happened. January felt like one long relapse. All the good things and feelings from the previous past 3 months faded and even though I still did not eat sugar, my thoughts and feelings and behaviours were very similar to when I do. And I was craving sugar like I was paid for it!

I was in complete distress trying to figure out why this was happening. Maybe it was just January, which will never be my favorite time of year. Maybe it was because I had wine almost everyday while in Zanzibar. I don’t know…

At some stage, I got so tired of all the cravings that I went for the most effective way I know of: A strict ketogenic diet. I limited my carbs and within a few days entered ketosis. What a relief that was. Ketosis really do kill all cravings (at least for a while, is my experience). And I enjoyed the peace. After about a month I slowly went back to my own moderate low carb-real food diet. And now I feel okay. Not fantastic. But okay.

But I just got a bit more respect for the power of sugar cravings! 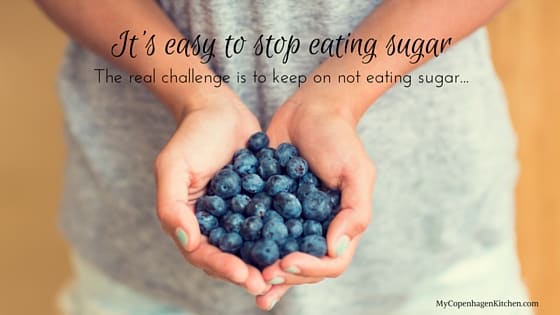 IT’S NOT ABOUT SUGAR
One of the most important things I have learned is that it’s not really about the sugar. It’s about having gotten used to using substances like sugar to cope with experiences and feelings instead of coping with them in a mature, adult way.

This goes both for highs and lows. Sugar both sedates and enhances feelings quite effectively and we can need them both. Happy feelings can be just as difficult to deal with as sad feelings.

Sugar can also be (ab)used to try to correct some inner balances in the brain’s signal substances (serotonin, dopamine, beta-endorphin). And if you have been used to using sugar to “self medicate”, your brain will just outsmart you and find another way.

So giving up sugar is really about daring to look your inner self in the eye and confront all the wrong conclusions you may have taught yourself through your entire life. And that’s a much bigger task than to give up sugar (and really not a task I feel able to manage as we speak).

LESS STOMACH PAIN – and maybe less pain in general
One of the most positive things that has come out of my sugar freedom is that my stomach pains have been strongly reduced. Less pain and less bloat. Except for when we went to Madrid and I had one of the worst IBS flares for… well, a really long time. But generally, my stomach has been much, much happier.

Another thing I haven’t written so much about on this blog is the lower back pain I’ve been living with for the past 3 years. For 3 years they have bothered me, stopped me from working out and doing things I wanted to and often they have taken time out from my day and sent me to the couch with pain medication. Last year in such a degree that I started looking at how many work hours I actually lost laying there on the couch.

I’m so happy to tell you that I haven’t taken any pain killers since Zanzibar in December. And I even started working out a bit (with the help of a very skilled trainer). I’ll tell you much more about that some other day.

SO WHAT HAPPENS NEXT?
I don’t know to be honest. At the moment, I don’t give it much thought.

Even though I called this experiment 100% sugar-free, I haven’t been 100% sugar-free because I have still eaten out on restaurants, been traveling etc. I’ve made the best choices I could during those circumstances but I know that there will always be some amounts of sugar added to food when you don’t cook your own. I haven’t experienced any negative things about getting small amounts of sugar in my food.

I also have some really exciting travel plans these next couple of months (Paris and NY) and a part of me feel like I’m limiting myself or keeping myself from good experiences food wise. But is that just my junkie brain talking? I don’t know…

At the same time, I remind myself why I started this experiment in the first place, namely 1) My personality changes when I eat sugar and 2) I get NO satisfaction from eating sugar. All it gives me is an urge to eat more sugar. And that abstinence is still so much easier for me than moderation. You can read my full story HERE.

So I don’t know, to be honest…

So this was my 6 month’s update. If you have any questions or comments, please let me know. I’ll be happy to hear from you.